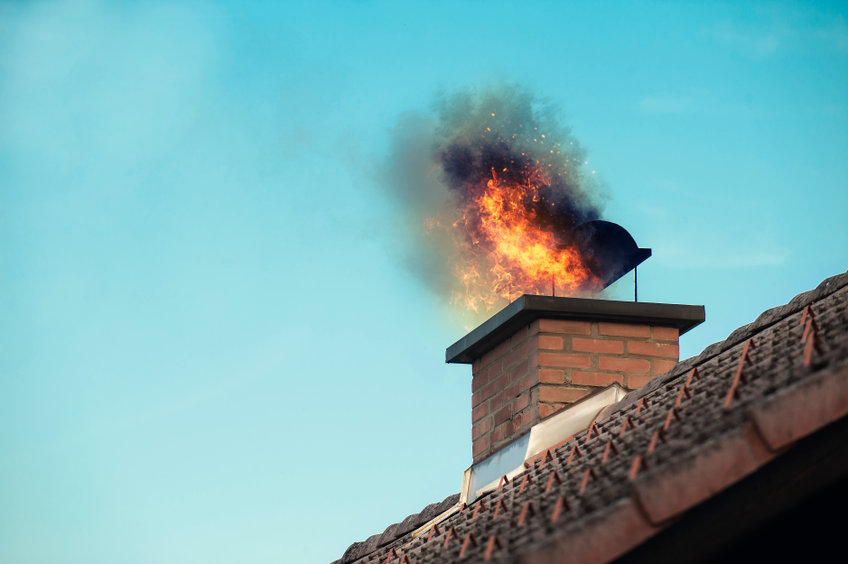 Chimney fires are one of the leading causes of house fires in the northeast this time of year. According to the U.S. Consumer Product Safety Commission, there are more than 22,000 chimney fires annually, causing upwards of $125 million in property damage across the United States.

What Causes a Chimney Fire?

The most common cause of chimney fires is creosote buildup. Creosote is a highly-flammable, black or dark brown residue that coats the inside of chimney walls. It’s created when smoke, vapor and unburned wood particles escape from the hot fireplace or wood stove and condense in the cooler chimney. If too much creosote builds up in the chimney – and the temperature inside the flue is hot enough, or flames or sparks can reach the creosote – a chimney fire can start.

Many slow-burning chimney fires go undetected until the damage is uncovered during an inspection. However, these fires can also be explosive and dangerous. You may hear loud cracking and popping sounds, or a rumble like a low-flying jet, and notice an intense hot smell, or see flames or dense smoke shooting from the chimney.

How to Prevent a Chimney Fire

Fortunately, there are a few simple steps you can take to protect your home and family from a chimney fire.

It’s imperative to have a certified chimney sweep inspect your chimney, venting system and wood stove or fireplace once a year, or more often if you use it daily for home heating. A professional can identify damage or obstructions, such as a cracked flue liner or a bird’s nest, which may not be visible to the naked eye, but can lead to a chimney fire.

In addition to inspections, most chimney professionals will also repair any damage and clean your chimney. More than 1/8 inch of buildup on the interior walls of your chimney requires a cleaning. A professional cleaning typically includes a sweep of the outside of the chimney, as well as the firebox, the smoke shelf and chamber, the flue and the flue liner.

Chimney fires can also be the result of obstructions in the flue, such as leaves, debris and animal nests, which can ignite when reached by embers or flames. To prevent birds, animals and debris from getting inside your chimney, a cap should be installed on the crown outside the flue opening. Chimney caps also prevent smoke from “back puffing” into your chimney and home, and minimize acidic rain, which can cause corrosion.

There are several options for chimney caps available, including standard galvanized and decorative models. However, installing the cap yourself may void the warranty, so make sure to read the fine print and call a professional if needed.

To minimize creosote buildup, only burn “clean” fires with more flame, and less smoke. Choose hardwoods that have been cut, split and dried for at least six months, preferably a year. As a rule, evergreen woods dry out faster than dense woods, like ash, elm, maple and oak, but they also tend to pop and smoke more than hardwoods. Make sure to leave space around the wood stack to allow air to circulate and dry the wood, and consider purchasing a wood moisture meter to ensure it contains no more than 20% moisture content.

Also, avoid burning cloth, magazines, wrapping paper and cardboard, and never use liquid accelerants, such as gasoline, kerosene or lighter fluid in a fireplace or wood stove. If using newspaper as kindling, place it under the grate to prevent paper embers from rising up the flue.

Keep the damper fully open, since oxygen starvation can cause smoking and smoldering that leads to creosote buildup. Regulating the temperature is also important. Too much heat can close the air intake, and not enough can leave behind unburned combustible material. The optimum temperature on the outside of the stove or pipe is 300-500 degrees. A probe thermometer can measure the temperature inside the flue, which should be 600-1,000 degrees.

Remember to always extinguish the fire before going to bed. Use a fireplace poker to spread out the embers and cover them with ash using a fireplace shovel. Baking soda can also be used on cooled wood to extinguish embers. Once cooled for 8 hours, shovel the ashes into a metal container filled with water and store it outside, away from flammable materials, prior to discarding.

What to Do if You Have a Chimney Fire

Again, only if it is safe, you can use a chimney fire extinguisher and close any doors or inlets to your fireplace or stove to cut off oxygen to the fire. Then, get out safely and call 9-1-1. Before the fire department arrives, you have the option to put a hose on your roof to prevent the fire from spreading, however, when the cold water comes in contact with the hot chimney it could cause masonry to crack.

After the fire is out, even if it doesn’t look like there is any damage, it’s critical to hire a certified chimney technician to perform a level 2 inspection. They will determine if any repairs are needed before you can use your chimney again.

If your home suffers from fire or smoke damage as a result of a chimney fire, MacFawn Fire & Flood Restoration is here to help. We provide comprehensive fire & smoke restoration in Albany NY and the surrounding areas, including Clifton Park, Saratoga and Glens Falls, as well as Tampa FL and Media PA. For 24/7 emergency service and an immediate response, call 877-MACFAWN.